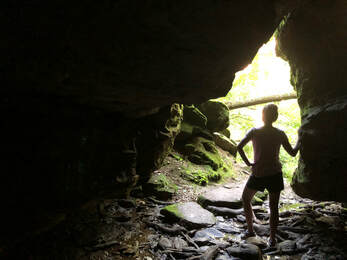 I am a writer who is passionate about picture books and middle grade literature. I love to write lyrical stories that are full of heart, with a touch of adventure and/or whimsy.

My journey as an author began in 5th grade. I wrote a story about an American flag stamp named Andy and entered it in a contest. When I saw my story published in an actual book, I was hooked! I wanted to be an author.

I filled notebook after notebook with stories, entered a few more contests in high school, and taught middle school writing and reading for five years, but it wasn't until I became a mom that I found the courage and inspiration I needed to dive in to writing with both feet.

Now, when I'm not reading or writing, you can find me experimenting in the kitchen, attempting to garden, having dance parties with my two (soon to be three!) children, or exploring the outdoors in search of fresh inspiration.

I leave you now with one final thought: I believe that stories hold a unique power to evoke empathy, ignite courage, and light the way home. I think Samwise Gamgee in the movie Lord of the Rings said it best:

Sam's Speech - Worth Fighting For
​
It's like in the great stories Mr. Frodo.
The ones that really mattered.
Full of darkness and danger they were,
and sometimes you didn't want to know the end.
Because how could the end be happy.
How could the world go back to the way it was when so much bad happened.
But in the end, it's only a passing thing, this shadow.
Even darkness must pass.
A new day will come.
And when the sun shines it will shine out the clearer.
Those were the stories that stayed with you.
That meant something.
Even if you were too small to understand why.
But I think, Mr. Frodo, I do understand.
I know now.
Folk in those stories had lots of chances of turning back only they didn’t.
Because they were holding on to something.

Frodo : What are we holding on to, Sam?
​
Sam : That there’s some good in this world, Mr. Frodo. And it’s worth fighting for.